← more from
URBNET
Get fresh music recommendations delivered to your inbox every Friday.
We've updated our Terms of Use. You can review the changes here.

Good Luck With That 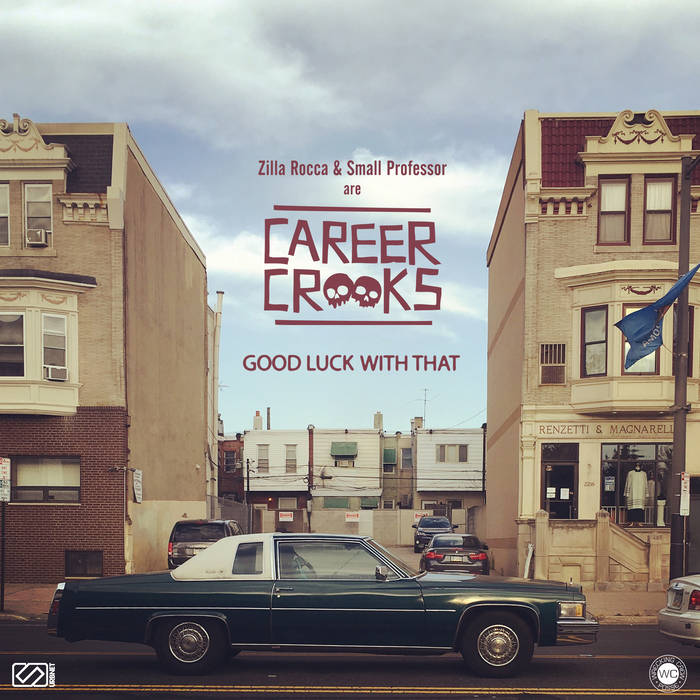 firstlastlovemusic It`s a taste of the old school.

PRESS: BANDCAMP.COM The Best Hip-Hop Albums of 2017
South Philadelphia’s Zilla Rocca and producer Small Professor’s Good Luck With That begins with a run of boisterous, raw, breakbeat-based beats topped with Rocca’s smart brand of lyrical one-upmanship. But those opening moments—which include the Fargo-themed posse cut “Mike Milligan”—soon segues into a triumph of concepts and storytelling. “Angel Dust” pines for the days when rappers were “smoking PCP for the art,” “Lipstick Itch” struggles with the nuances of commitment in long-term relationships, “Clock’s Ticking” reflects on how age changes priorities, and “Cold Ten Thousand” is a rain-soaked trawl through the Philadelphia underbelly, complete with a protagonist whose clothes reek of pizza and sweat. Most wonderfully of all, the album closes out with a modern example of the ancient art of the shout-out song, “We Say Peace.”
~~ daily.bandcamp.com/2017/12/20/the-best-hip-hop-albums-of-2017

PRESS RAPREVIEWS.COM
This is the point in the review where if I had something critical or harsh to say I'd lay it down flat like carpet. Honestly the only unsatisfying thing was that 45 minutes wasn't enough and it left me wanting more, and the review also reminded me why certain supposedly authoritative internet encyclopedias just don't cut it because they don't seem anybody referenced here worth a page. They ALL are worthy though just like this album is worth your money and three quarters of an hour to devote to it. Turn off the TV, put down the magazine, just sit and listen and enjoy.
Music Vibes: 9 of 10 Lyric Vibes: 8.5 of 10 TOTAL Vibes: 8.5 of 10
~~ rapreviews.com/archive/2017_06_goodluck.html


PRESS: BANDCAMP.COM
A Walk Through The Avant-Garde World of ‘Art Rap’ Music
There have always been spheres of rap that parallel the underworlds in the pages of Chandler, Hammett, Ellroy, Puzo, and Goodis. Slick-talking rappers like Kool G Rap and Raekwon relayed the dangerous means and luxurious ends of felonious pursuits with alluring enthusiasm and terrifying indifference. Zilla Rocca, on the other hand, leans hard into the noir, aligning himself with bitter, scarred, and hard-drinking P.I.s like Philip Marlowe and Sam Spade.

The Philadelphia rapper has spent much of his career defining and refining what he calls ‘noir-hop.’ Rapping over production that shuttles between aggressive, distorted indie rock and the kind of dark, brooding keys and chords that wouldn’t sound out of place in Robert Mitchum flick, Rocca writes about Philly crime with the clipped lyricism of noir’s best prose stylists. Neat whiskey, fatal blondes, John Doe’s who couldn’t pay the vig—it’s all here. When not making music, Rocca also writes about rap professionally. Therefore, his songs often feature brilliantly deployed allusions to the canon. If 2014’s No Vacation for Murder and this year’s collaborative album with Small Professor (Good Luck with That) are any indication, his forthcoming album Future Former Rapper will once again seamlessly blend rap and pulp fiction. —Max Bell
~~ daily.bandcamp.com/2017/09/01/art-rap-artists-guide/

PRESS: Premiere: Career Crooks – ‘Steve Martin’ (video) + Interview
Career Crooks is made up of emcee/beatmaker/writer Zilla Rocca, and producer Small Professor. They’ve been making music for years (check their respective Bandcamp pages here and here), but are now reaching a wider audience on the strength of their excellent new album, Good Luck With That, and the warm-up EP, Take What’s Coming. Grown Up Rap Editor Ben Pedroche spoke to them about writing, drawing inspiration from TV and film, their working process, and more. We also premiere the video for the latest single from the album, Steve Martin. Photos by Bob Sweeney.
~~ grownuprap.com/2017/06/05/premiere-career-crooks-steve-martin-video-interview

PRESS: DAMNTHATNOISE.COM Review
Run your funds and get this album! 8/5/10
damnthatnoise.com/post/161357156548/career-crooks-good-luck-with-that-album-review


BIO:
Career Crooks consists of long time Wrecking Crew collaborators Zilla Rocca, and Small Professor. Steeped in the late 1980’s to early 1990’s Career Crooks coupled street smart blue collar futurism, with a modernist approach, launching them to the level of current luminaries like KA, Roc Marci, and Westside Gunn. "Good Luck With That" is the cross-section of hip hop’s fascination with its early days, while still touching on all of the cultural touchstones of current times.

Before signing with URBNET for this project, Zilla and Small Professor were individually active and engaged within the indie and underground scene, regarded as veterans in their element. Their monumental contributions have garnered them much deserved respect and recognition.

Zilla has released numerous albums on his own imprint, Threedollarpistol Music, and via World Around Records. He has been featured in numerous heavy hitter publications such as Huffington Post, HipHopDX, Okayplayer, LA Weekly, Philly Weekly and Complex. Small Professor has continued to develop to his impressive “Jawn” series catalogue, which collectively spans nearly seven years. He has also worked with Coalmine Records on his 2013 project with Guilty Simpson.

Career Crooks is the culmination of the longtime collaborative relationship between Zilla Rocca & Small Professor. “Good Luck With That" is the kind of brilliance that could only be born out of that specific type of familiarity. Small Professor’s production is the spiritual cousin of RZA’s work on “Cuban Linx" at times, harnessing the moody atmosphere that breathed life into that project, but simultaneously feels like twilight in Philadelphia. An undeniable declaration of one’s own art.

Zilla takes the mood set by Small Pro and runs with it, dropping a seamless combination of stream-of-consciousness raps intertwined with expert story telling. The combination is a mesmerizing originality that taps into the feeling that we all had when we first fell in love with the form.

"Good Luck With That" features an array of guest appearances from, PremRock, DJ Manipulator, Curly Castro, ALASKA, My Man Shafe, Defcee, s.habIB, Dewey Bryan, and MaLLy. While each artist contributes texture to the flavor, it is the team work between Zilla and Small Pro that really makes the project cook.

With "Good Luck With That", Career Crooks are placing their stamp on the modern rap renaissance. It is a perfect and vital addition to the genre, and it deserves your attention.

Bandcamp Daily  your guide to the world of Bandcamp

Alex Rita and Errol from Touching Bass feature in our special London edition of the Bandcamp Weekly.